Bucket lists are something that many people dream up in their heads, talk about, plan for, and something that we’ve all got. It may be a trip, it may be an accomplishment, or an award for some people. Personally, I’ve got my own bucket list that has a variety of hunting, fishing, as well as personal things that I want to accomplish. One of those items on my list has always been to travel to New Zealand and go on a Red Stag hunt. Thanks to an invitation from Thompson/Center Arms, I was able to do that recently.

Just getting there, from our home in San Antonio, required nearly 40 hours of travel (which is always fun) to get from our front door to the Glen Dene Lodge who was hosting us. We traveled through Los Angeles, then Auckland, and eventually arrived in Queenstown, New Zealand. Queenstown was a really nice small town on the shores of a lake. The clean city has a waterfront village feel full of shops and restaurants. It didn’t take long to really be taken in by the New Zealand culture and lifestyle.

This trip was extra special to me because it’s a trip that my wife, Angel, was able to join, so we mixed in both my hunting passion with her desire to shop and sightsee. All three of which are easily done in New Zealand.

The next morning, after arriving in Queenstown, we all hopped in a van driven by our host Richard Burdon, who along with his wife Sara, own and operate Glen Dene Station located on the shores of Lake Hawea. One thing that stood out to me was how friendly their staff was and that you were welcomed with open arms by everyone from the moment you arrive until long after you departed.

After we settled in and checked our rifles, it was time to dive into the hunting. The game plan for the first day of hunting was to have Danielle Sanville, from Thompson/Center, and Eric Poole of Guns & Ammo, head off with their guide Stacy on a Tahr hunt about three hours away, while Angel, myself, and our guide, Dan Rossiter, went off in search of Red Stag.

For this hunt I would be using the T/C Pro Hunter Encore in .308 topped with a Cabela’s HD Instinct 4X12 Scope. We would be hiking a lot of steep and hilly terrain so I had brought along a new pack that Cabela’s is releasing this Fall to field test it in regard to carrying all my optics. These optics included a new, yet to be released, Cabela’s Spotting scope as well, and that I would be putting to the test glassing the hills, valleys and dense thickets of ferns that make up this part of New Zealand.

It wasn’t long into the glassing that morning that we spotted a group of several Stag’s bedded down on a hillside some distance away. After confirming there were at least three and possibly four shooters in the group we began to work our way around to get a closer look. We ended up hunting this group all day long after that fist stalk before finding success late the afternoon.

This is just a small part of the many memories we made at Glen Dene Station that week, all of which we’ll be sharing both in future episodes of Americana Outdoors and elsewhere. If you would like to book your hunt or trip of a lifetime at Glen Dene Hunting go to https://www.glendenehunting.com/ 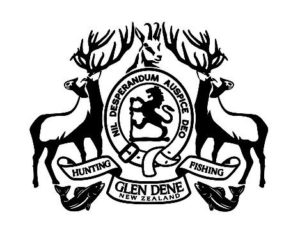