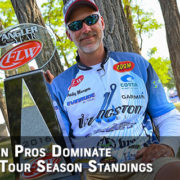 June 29, 2016 – Garmin International is proud to announce that five of its professional marine anglers – Andy Morgan, Chris Johnston, Stetson Blaylock, Scott Martin, and Mark Rose – finished in the top ten in the 2016 FLW Tour Angler of the Year (AOY) standings after the Tour finale on Lake Champlain last weekend. Garmin anglers impressively represented the top-three spots, with Andy Morgan leading the way as the 2016 AOY. This is the third AOY title for Morgan, who is the first in FLW Tour history to win the honor three times in four years. Chris Johnston, who finished second in standings, also came out on top as the 2016 Rookie of the Year (ROY). Adding to the list of Team Garmin FLW Tour accolades, Scott Martin, 2015 AOY, finished first at the Lake Champlain event, and Jason Lambert took home the top spot at Kentucky Lake earlier this month.

Garmin pros fished this year’s FLW tournament trail with LakeVü HD Ultra mapping, the most detailed lake maps available on the market today, along with a full suite of Garmin electronics, including Panoptix™ all-seeing sonar, a revolutionary technology that provides a real-time video-like view of what’s in front of the boat in real time, even while stationary.

“Electronics play a huge role in my success as an angler,” Morgan said. “I’m not a techy guy, so for me it’s all about simplicity and reliability – both of which Garmin sets the benchmark for.  When you’re trying to make a living in the outdoor world, dependability and reputation is key, and that’s why I switched to Garmin.”

“Garmin Panoptix played a key role in my success this year, and I believe you’re a step behind if you’re not using it,” Johnston said. “Coupled with the 1-foot contour detail on Garmin’s HD mapping that shows me things that other anglers don’t even have on their maps – I’ve never used anything that good and it’s been invaluable to me this season.”

In addition to being equipped with best-in-class sonar technology, Garmin pros also compete with the help of some of the industry’s most sophisticated chartplotters and multifunction displays. They fish with the popular Garmin echoMAP™ and GPSMAP® chartplotter/combo devices, available with display sizes ranging from four- to 16-inches, that feature built-inGarmin CHIRP DownVü™ and SideVü™ scanning sonar as well as traditional sonar.

For the highest level of detail on the water, Garmin anglers rely on preloaded LakeVü HD maps, which include more than 17,000 total lakes across the U.S. – more than double the number of preloaded lakes of any competitor. Of the preloaded lakes, more than 13,000 HD lakes feature 1-foot contours shoreline to shoreline – again, two times more than the competition.

Anglers and spectators will now set their sights to the 2016 FLW Forrest Wood Cup Championship in Huntsville, Ala. on Wheeler Lake, Aug. 4-7. Based on the FLW points standings, Garmin anglers made up nearly a third of the automatic qualifiers for this year’s Championship.

Recently, Garmin was named Manufacturer of the Year and received the honor of being the most recognized company in the marine electronics field by the National Marine Electronics Association (NMEA). Garmin’s portfolio includes some of the industry’s most sophisticated chartplotters and touchscreen multifunction displays, sonar technology, high-definition radar, autopilots, high-resolution mapping, sailing instrumentation and other products and services that are known for innovation, reliability, and ease-of-use.

For decades, Garmin has pioneered new GPS navigation and wireless devices and applications that are designed for people who live an active lifestyle. Garmin serves five primary business units, including automotive, aviation, fitness, marine, and outdoor recreation. For more information, visit Garmin’s virtual pressroom at garmin.com/newsroom, contact the Media Relations department at 913-397-8200, or follow us at facebook.com/garmin, twitter.com/garmin, or youtube.com/garmin.

All other brands, product names, company names, trademarks and service marks are the properties of their respective owners. All rights reserved.

This release includes forward-looking statements regarding Garmin Ltd. and its business. Such statements are based on management’s current expectations. The forward-looking events and circumstances discussed in this release may not occur and actual results could differ materially as a result of known and unknown risk factors and uncertainties affecting Garmin, including, but not limited to, the risk factors listed in the Annual Report on Form 10-K for the year ended December 26, 2015, filed by Garmin with the Securities and Exchange Commission (Commission file number 0-31983). A copy of such Form 10-K is available at http://www.garmin.com/aboutGarmin/invRelations/finReports.html. No forward- looking statement can be guaranteed. Forward-looking statements speak only as of the date on which they are made and Garmin undertakes no obligation to publicly update or revise any forward-looking statement, whether as a result of new information, future events, or otherwise.