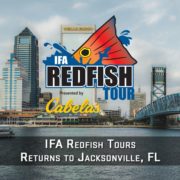 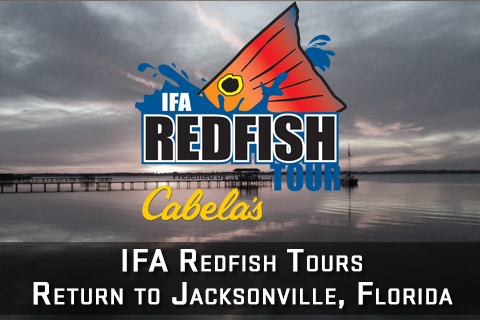 NEW SMYRNA BEACH, Fla. – Inshore anglers from across Florida and surrounding regions will converge at Jacksonville, Florida, March 18-19, for the first regular-season event for the Florida East Division of the 2017 IFA Redfish Tour Presented by Cabela’s and IFA Kayak Fishing Tour Presented by Hobie Fishing.

The IFA Redfish Tour Presented by Cabela’s will begin its activities on Friday, March 17, with tournament registration from 5-7 p.m. at Jim King Park and Boat Ramp at Sisters Creek (8203 Heckscher Dr., Jacksonville, FL 32226) followed by the captain’s meeting. Anglers will launch from the park at safe light on Saturday, March 18. Check-in times will be assigned at Friday’s captain’s meeting with anglers returning to the park for the weigh-in, which is set to begin at 3 p.m.

Competitors in the IFA Kayak Fishing Tour Presented by Hobie Fishing will have registration from 6-7 p.m. with captains meeting to follow on Saturday, March 18, at Jim King Park and Boat Ramp at Sisters Creek. Anglers will launch Sunday, March 19, from the location of their choice. Check in times and weigh-in location will be announced at Saturday’s captain’s meeting.

For more information or to become a member of the IFA, the fastest-growing inshore fishing tournament series in the United States, go online to www.ifatours.com. To discover more about kayaking and Hobie Fishing go to www.hobiefishing.com.