NEW SMYRNA BEACH, Fla. – Ty Nelson, of North Fort Myers, Florida, measured a combined limit of 54.00 inches to win the first regular-season event for the Florida West Division of the IFA Kayak Fishing Tour presented by Hobie Fishing on March 6 at Punta Gorda, Florida. The angler won a total of $2,257, including a Power-Pole Micro Anchor for his first-place finish.

Nelson adds this win to an impressive competitive resume. A win last year at Titusville complements a string of top-five finishes in his three years of fishing the IFA Kayak Tour. Nelson traveled 10 miles to fish in Pine Island Sound and was surprised at the amount of wind he encountered.

“Today was a little more windy than I expected,” said Nelson. “It made it tough for the whole field, which I like, but persistence paid off for me in the end.” 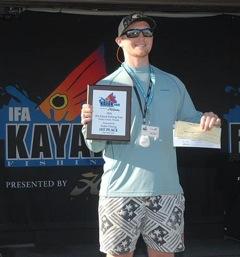 The angler fished potholes to land an early trout and then concentrated on tailing redfish with top-water baits, artificial shrimp and paddletails. In the past, Nelson prepared for upcoming events. Without the opportunity to scout early, Nelson felt lucky to have done well in this event.

“I did not have a chance to pre-fish and won anyways,” said Nelson. “When does that ever happen? I felt that I did really well given the circumstances.”

Ritchey fought 20 to 30 mph winds but enjoyed clear skies. Fishing in the Pine Island area, the angler threw imitation shrimp and twitch baits with long casts down wind and drifted his kayak.

Ritchey has a ritual where he asks himself, “What kind of damage can I do if I gave it 100 percent?” At the end of the day, his all-out strategy showed on the leaderboard.

Longtime IFA Kayak Tour veteran Tony Lai, of Seminole, Florida, measured a combined 50.00 inches to take third place. The angler targeted his fish with top-water baits and soft plastics. Lai won a total of $451 for his limit and gained 198 points in the Angler-of-the-Year race.

The next stop for the IFA Kayak Tour is March 20 at Fernandina, Florida. Anglers who enter a minimum of two events and compete in at least one event will be qualified for the 2016 IFA Kayak Tour championship.

For more information or to become a member of the IFA, visit www.ifatours.com. To discover more about kayaking and Hobie Fishing go to www.hobiefishing.com.

Jason Christie Suits up with Gill
Scroll to top