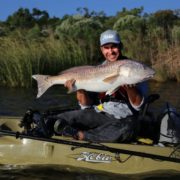 Oceanside, California – May 11, 2016 – The sixth annual Hobie Fishing World Championship (HFW6), presented by Rhino-Rack™ and hosted by Hobie Cat® Company, will take place in La Fourche Parrish, Louisiana, December 4-11 of this year. Located in Southern Louisiana 1:30 minutes from New Orleans, La Fourche Parrish is the gateway to Cajun Country and the Gulf of Mexico, offering a distinctly Louisiana “bayou” way of life and promising a memorable experience for both U.S. and international competitors. And then there is the fishing. According to Hobie’s Keeton Eoff, this could easily be the kayak fishing capital of the world.

Anglers from around 25 countries are expected to compete for the chance to be crowned this year’s Hobie Fishing World Champion. All competitors will fish for trout, flounder and redfish (40 plus inchers are common that time of year) from identically rigged Hobie Mirage® Pro Angler 14’s, provided by Hobie Cat Company and outfitted with Lowrance® Electronics and Power-Pole® MICRO™ Anchors.

The tournament will be a traditional CPR (Catch, Photograph and Release) format in which each competitor will enter his or her three best lengths in aggregate each day. The angler with the highest cumulative length over the three day period will be crowned Champion. By qualifying, anglers have earned their ticket to an experience of a lifetime with plenty of prizes to boot.

A series of five qualifying events being held in the U.S. and Canada gives anglers the opportunity to qualify for six coveted spots on the North American team. Benton Parrott, the USA’s only qualifier as of this date, will compete in his 4th HFW, attempting to dethrone Chinese 2015 winner, Ma Xiaohong. “Everyone loves Ma, it’s the funniest thing,” mentioned Keeton. ‘And he doesn’t speak a lick of English.”

Benton went on to add that ”every competitor will catch a lot of fish and some of them will be trophies, but we should all catch good fish. I promise you. Just last week I was fishing a trout hole in the area in two feet of water and caught a 33-inch red. When you fish there, you can launch in one spot and find all your species. The estuaries go for miles. And there are no bad places to fish.”

Since 1950, Hobie has been in the business of shaping a unique lifestyle based around fun, water, and innovative quality products. From their worldwide headquarters in Oceanside, California, Hobie Cat Company manufactures, distributes, and markets an impressive collection of eco-sensitive watercraft, with subsidiaries; Hobie Cat Australasia, in Huskisson, NSW, Australia and Hobie Cat Europe, in Toulon, France and independent distributors; Hobie Kayak Europe and Hobie Cat Brasil. These products include an ever-expanding line of recreation and racing sailboats, pedal-driven and paddle sit-on-top recreation and fishing kayaks, inflatable kayaks, fishing boats, surfboards and stand-up paddleboards and a new category of Hobie Mirage Standup pedalboards, plus a complementary array of parts and accessories.www.hobiecat.com