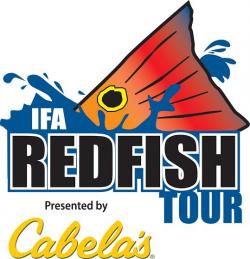 NEW SMYRNA BEACH, FL – Kevin Akin and Bartt Caron, both of Corpus Christi, Texas, weighed a two-redfish limit that totaled 17.46 pounds to win the first regular-season event for the Texas Division of the IFA Redfish Tour presented by Cabela’s on April 2 at Port Aransas, Texas. The winning anglers took home a brand new, fully rigged Ranger 1862 with a Yamaha outboard. Along with contingency prize money, the duo earned a total of $29,597 in winnings. 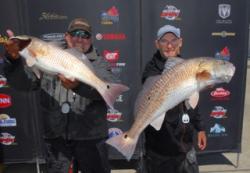 “We knew the weather was going to be rough,” said Akin. “It made fishing very difficult with north winds blowing 25 miles per hour plus.”

Despite the difficult conditions the anglers managed to pull off a win and catch a 9.44-pound giant – the heaviest of the tournament. The lunker won the $500 Berkley Big Fish Award.

“We got lucky,” said Akin. “We fished great together.”

Second-place finishers Jay Watkins of Rockport, Texas, and Ryan Watkins of Selma, Texas, weighed a total of 15.72 pounds of redfish. The two managed to bring home $3,968 in winnings, including $1,420 in Anglers Advantage cash.

The father-and-son team ran 15 miles north to Mosquito Bay to catch their limit. The anglers made long casts and worked potholes with twitch tails. The team was more than happy with their performance this tournament.

“Our performance was excellent,” said Jay Watkins “A dad fishing with his son is priceless.”

Marcus Russell and Matt Merrell, both of Portland, Texas, won the $1,405 third-place prize. The team weighed a total of 15.62 pounds. The anglers fished hard all day with Berkley Gulp! in the Carlos Bay area.

The Man With All The Toys
Scroll to top