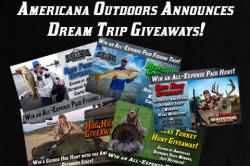 The first of the five dream once in a lifetime hunting and fishing trips is a Redfishing trip. The winner will be staying at the world famous Venice Fishing Lodge in Venice, Louisiana. As part of the trip the winner will be guided by Americana Outdoors Staff member, Cody Levy with cameras rolling to capture all the action. The second giveaway trip will be another once in a lifetime opportunity to go bass fishing in Texas with three-time FLW Angler of the Year, Clark Wendlandt in the fall of 2016. The third dream trip will be a Whitetail Deer hunting trip in south Texas with none other than Yamaha Whitetail Diaries Host and Americana Outdoors staff member, Wade Middleton. This hunt will be done during December of 2016 and the winner will be staying on site at Wade’s personal deer camp. Next up will be a Rio Grande Turkey hunting trip, guided by Americana Outdoors staff member, Jeff Reynolds in April of 2017. Jeff will share decades of experience hunting turkeys all while the cameras capture all the action. The final dream hunt will be a hog hunt at the Four Amigos Ranch in south Texas, which will take place in May of 2017, also guided by the Americana Outdoors staff.

The Americana Outdoors staff is excited to present these made-for-TV hunting and fishing trip giveaways to their viewers.

“We are thrilled to be able to give our viewers and fans an opportunity to get to hunt and fish with us through these dream hunting and fishing trips,” said Americana Outdoors staff member and President of CarecoTV, Wade Middleton. “We love being able to give back to our viewers and we look forward to meeting the five lucky giveaway winners!”

To enter for your chance to win one of these five dream trips, visit www.AmericanaOutdoors.com and click on the ‘Win Prizes!’ tab or click HERE.