Oceanside, California — After yielding fish, fun and friendships with a few cold ones and dim sum thrown in, seven North American World Championship Team members are back from representing the USA and Canada for the fifth annual Hobie Fishing World Championship (HFW5), presented by Rhino-Rack™ and hosted by Hobie Cat® Australasia. Anglers either qualified through events in their home country or were invited to attend the event held November 9-16 on Shang Lake in Changshu, China. Competitors from twenty countries fished in the country’s first-ever HFW for the chance to be crowned this year’s Hobie Fishing World Champion. After three days of tough fishing and challenging conditions, China’s Ma Xiaohong deservedly claimed the top prize. Just as soon as handshakes, camaraderie and celebrations were over, however, the other competitors started planning how the crown could be theirs at the 2016 6th Hobie Fishing World Championship. Date and location to be announced. 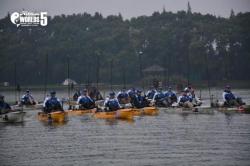 Located in the central eastern part of the country, Changshu is steeped in Chinese history, starting in 770 BC. It was a memorable experience for all attendees including Team North America.

For Dave Jaskiewicz from South Carolina, memories were built from traveling such a long distance. “This was my first international tournament and the first time leaving my country. I was both excited and anxious. I’ve been so focused on the fishing part of this event that the adventure of being in a different country with people from across the world has just started to sink in. I was thrilled to be in an event with like-minded people from around the globe who share my passion. To be fishing along side some of the superstars of our sport, including past HFW winners Scott Baker, Richard Somerton and of course USA’s own Steve Lessard, is an opportunity of a lifetime by itself.”

Tyson Davidson from Kentucky learned an important lesson about tournament fishing. “I started the tournament throwing baits and using techniques I was confident in. When those didn’t work, I would try different baits that were given to us from Li by Lurefan. I never had any encounters throwing his lures although I will be able to use them here for bass. It goes to show that one of the most important things you can do in a tournament is go with what you’re confident in, stay focused and keep your line in the water as much as possible.”

Benton Parrott who lives in Alabama expanded on the difficult fishing the competitors faced. “This was my 3rd Hobie Worlds competition and I felt with the research I had done before arriving that I was ready to compete. I tried every tactic I had researched for these species, then went to what I knew for salt and fresh water species from here at home. Every day gave a new perspective from what I had learned from other anglers the night before. I had met many of the competitors before and they were happy to help out and share knowledge. End result though: the fish were not as cooperative as I would have liked. It now makes me more than ever want to go after these species since they clearly won the 1st round against us.”

An especially heartwarming story about the difference in cultures came from Louisiana’s Steve Lessard. “The students that translated for us are a story that will never be forgotten. One night one of the girls ‘Michelle’ was having a birthday, so some of the guys arranged a secret cake. We surprised the English major by surrounding her and singing Happy Birthday, which was something the student had never seen. They were there to help us, but we returned the favor and treated them like our own kids.”

For Tim Percy from Ontario, Canada, it was an experience of a lifetime. “I came into the competition with a positive attitude. I didn’t put any pressure on myself to win the competition. I went there for the experience. If I did well, that would be a bonus. All the competitors were great. I now have new friends around the world and friendships that will last a lifetime. Prior to this event, I was content to limit my travels within Canada and the U.S.A. Now I plan to travel elsewhere to fish with my new friends.”

New Jersey’s Bob Neuweiler summed the whole event up. “I spoke and shared meals and beverage with anglers from Ireland, Germany, Austria, Australia, Denmark, China, Canada, Slovakia, Singapore, Taiwan, Netherlands, UK, Sweden, Czech, Ireland, France, South Korea, New Zealand and USA- – – – – It is interesting that adversity does bring people together in a certain way. We all wanted to compare our observations, but how without revealing our secrets? Carefully chosen words tempered with the universal fisherman’s respect for privacy made for entertaining conversation. The things left unsaid were the most interesting. No matter what country an angler lives we are all FISHERMEN.”

For more information and to pick up images and video, log onto hobiefishingworlds.com.

Since 1950, Hobie has been in the business of shaping a unique lifestyle based around fun, water, and innovative quality products. From their headquarters in Oceanside, California, Hobie Cat Company manufactures, distributes, and markets an impressive collection of eco-sensitive watercraft worldwide, with subsidiaries; Hobie Cat Australasia, in Huskisson, NSW, Australia and Hobie Cat Europe, in Toulon, France and independent distributors; Hobie Kayak Europe and Hobie Cat Brasil. These products include an ever-expanding line of recreation and racing sailboats, pedal-driven and paddle sit-on-top recreation and fishing kayaks, inflatable kayaks, fishing boats and stand-up paddleboards, plus a complementary array of parts and accessories.