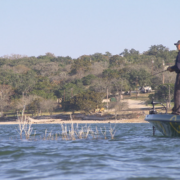 According to Texas Parks and Wildlife Medina Lake at full pool covers approximately 5,400 surface acres of water.   The lake was originally impounded in 1913 for irrigation needs but it’s also provided anglers with countless hours of fishing fun.  When visiting Medina you’ll find a lake with quite a few boat docks as well as scattered shoreline cover based on current water levels.   Those water levels or shall we say those high water levels and recent stocking of the lake are what brought the Americana Outdoors team to visit the lake a couple times recently.  Lake Medina is now on the rebound after having less than 10% of water in it not long ago.  Thanks to recent rains over past three years and a large scale stocking effort from Texas Parks and Wildlife the future is certainly bright.

“I used to love to fun fish on Medina both for fun and even a few small tournaments in the late 90’s and early into 2000’s.  We would go out catch lots of small fish and an occasional 4 to 6 pound fish but mostly it was just fun to fish.  But then the drought hit and you couldn’t even really unload your boat and thus I quit going there.”  Wade Middleton of Americana Outdoors. 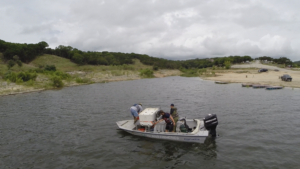 “It’s really like a brand new lake based on what I saw out there.  There was flooded brush everywhere and it wasn’t hard to catch fish in the 8 to 12 inch range.  I’m sure those fish we’re part of that stocking Texas Parks and Wildlife did.   The future is really bright for Medina and I can’t wait to get back out there next spring and for years to come”  Wade Middleton 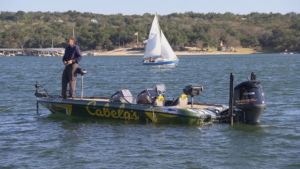 Lake Medina is back and in good shape for both anglers and pleasure boaters. 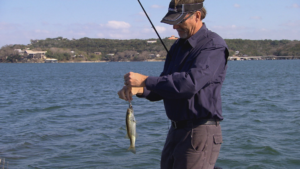 One of the many small bass caught that day on Medina. The future is bright for this lake!