FLIPPIN, ARK. After a five-year drought, Ranger Boats Pro Tom Keenan broke through with a convincing win at the Cabela’s National Walleye Tour event at Sandusky, Ohio, on Lake Erie. The angler’s two-day total of 91.46 pounds netted a combined $87,420, including a fully rigged Ranger 620FS with 250 HP Evinrude outboard. The victory also pushed Keenan’s career winnings over the $1 million mark – a distinction few other walleye anglers can claim.

Keenan’s last tournament win came in 2010 with several close finishes in between. Coming into the NWT Lake Erie event, Keenan brought both confidence and swagger. 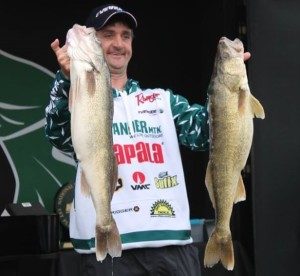 “It’s my first tournament to win in five years and it feels awesome,” said Keenan. “I’ve had a lot of really close opportunities in the last four or five years and I just didn’t close the door.”With the most of the field heading west both days, Keenan ran east to the less-populated waters around Loraine, Ohio. The angler trolled Rapala Husky Jerks and 800 Series Reef Runners.”White was the key color,” explained Keenan. “Purple and white or pink and white. At the end of the day, purple and white was probably the best.”Keenan is a longtime Ranger owner and credits his ability to make long runs and troll with finesse in the same boat as key to his success over the years. As a tournament angler, Keenan has also benefitted from the Ranger Cup contingency program with over $100,000 won in career bonuses.”I don’t care how far the fish are away, I am willing to go get them with my Ranger/Evinrude boat and motor package,” said Keenan. “Once I get there I can fish too, and that’s a big deal. Because of the way the Ranger is designed, it is very easy to troll with no matter how bad the conditions get.”With the lead in the Lucas Oil Angler-of-the-Year points race, Keenan plans to compete in the remaining regular-season events and make the trip to Mobridge, South Dakota, for the championship.

“I am very familiar the next two bodies of water and they are close to home,” said Keenan. “I have won angler of the year on the FLW Tour several times and now my goal is to win the NWT.”