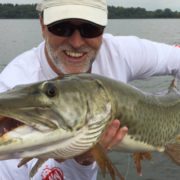 FLIPPIN, ARK. (October 10th, 2016) The Fresh Water Fishing Hall of Fame recently selected longtime Ranger Pro and brand ambassador Steve Pennaz for enshrinement into the hall. Pennaz was selected for his remarkable 30-year career in the sportfishing industry where he educated, entertained and inspired millions of anglers.

The Fresh Water Fishing Hall of Fame recognizes persons, organizations and institutions that have made a significant and lasting contribution to the heritage of freshwater fishing. The hall of fame also establishes programs to foster, maintain and improve the environment for future anglers.

“Steve has been instrumental to the growth of the sport-fishing industry and has influenced generations of anglers,” said Ranger Boats Marketing Communications Manager Matt Raynor. “We are honored to have Steve represent the Ranger brand and are privileged to call him a good friend.”

Pennaz currently hosts the TV series “Lake Commandos, Man vs Lake vs Man” but has served many roles throughout his 30-plus years in the fishing industry. In 1988, Pennaz was named executive director of the North American Fishing Club and served on the upper management team that successfully launched the organization, which eventually grew to more than 550,000 members.

The new Fresh Water Fishing Hall of Fame inductee also oversaw the development and launch of award-winning North American Fisherman magazine, serving as editor for more than 15 years. Pennaz has hosted a variety of TV programs, served as board member for conservation groups and freelanced for some of the most prestigious outdoor publications.

His awards include the Golden Moose Award for programming excellence, Sportsman Channel’s Fan Favorite Fishing Show and the Professional Outdoor Media Association’s Pinnacle Award. With his induction, Pennaz joins the ranks of some of the most influential and significant people and organizations in the sport-fishing industry.

Headquartered in Flippin, Ark., Ranger Boats is the nation’s premier manufacturer of legendary fiberglass and aluminum fishing boats, which include series of bass, multi-species, fish ‘n play, waterfowl utility and saltwater boats. Founded in 1968 by Forrest L. Wood, Ranger Boats continues its commitment to building the highest-quality, strongest-performing boats on the water. For more information, go to RangerBoats.com.