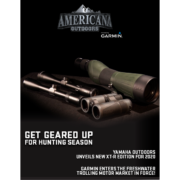 Though the bite of fall fishing is always enticing me to the lake (or maybe the season doesn’t matter and the lake is always calling my name!), I’ve been fully emerged in hunting season already! Before August was even halfway done, I was making a packing list, testing must-have in the field hunting gear, frequenting my local Bass Pro Shops and Cabela’s for a few purchasing opportunities, and making sure our team was prepared for some awesome hunts this season.

For the third year in a row, I headed to Kentucky for opening day of archery season and the quest for a Velvet Whitetail – just like last year, our Americana Outdoors team was also lucky enough to have Yamaha Outdoors’ Steve Nessl join us again for these hunts. Plus, he brought all the big toys – a trailer full of Yamaha Wolverine X4 and Yamaha Viking side-by-sides. These were the perfect addition to our hunts, getting to our locations, and recovering our harvests. Over the next few weeks, we’ll be sharing our Kentucky hunting experiences with everyone through a handful of videos.

With just a few days of rest between travels, and some laundry and re-packing, our team was then headed out to Kansas for opening week of muzzleloader season. It’s been a while since we have been in Kansas for opening week – and we were able to see some amazing whitetail, enjoy some cooler morning weather, though the afternoons were not too much less than Texas temps! Of course, I had my T/C Impact!SB™ muzzleloader ready to go – follow this adventure soon on Facebook and Outdoor Action TV.

During all our hunting experiences, the rest of our team was not resting – they were covering the most prestigious walleye fishing event of the year, the National Walleye Tour’s Championship tournament at Devils Lake; as well as seeing how the IFA Kayak Championship at Grand Isle, Louisiana played out…with a BIG congratulations going out to all those anglers! So though I haven’t been on the water, I’m still getting my fishing fix vicariously!

Enjoy these next pages of hunts, fishing experiences, and all the gear you need to get the job done!