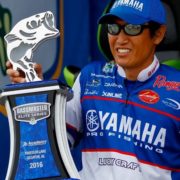 Comes from Behind to Capture Sixth B.A.S.S. Win

DECATUR, Ala., May 2, 2016 – Yamaha Pro Takahiro Omori of Emory, Texas claimed his sixth Bassmaster® Elite Series win on Sunday, May, 1 on Wheeler Lake. Coming from behind to beat Day 2- and Day 3-leader Dave Lefebre, Omori brought in five bass on the fourth day weighing an impressive 25 pounds, three ounces to capture the win. In addition, he won the Phoenix Boats®Big Bass award for the final day with a bass weighing in at five pounds, 15 ounces. He finished with a four-day total of 81 pounds, six ounces.
Omori’s final weight was more than four pounds better than second place finisher Lefebre. Yamaha Pros Bobby Lane (60 pounds, seven ounces) and Cliff Crochet (59 pounds, 10 ounces) took fifth and seventh places respectively.
Omori caught most of his bass early in the morning, but was also successful catching bigger bass as the day progressed. His baits included a walk-the-dog style topwater, a five-inch swimbait in a shad pattern and a Carolina-rigged worm.
After the first day of the tournament on Wheeler, Omori brought in only 10 pounds, seven ounces putting him in 72nd place.  Day two went much better for  the Pro as he brought in 23 pounds, three ounces, putting him in fourth place. On Saturday, he continued to make progress with five fish weighing 22 pounds, nine ounces, propelling him into second place behind Lefebre before fishing the final day of the tournament. The 2004 Classic® champion brought in the biggest bag of the tournament on Sunday to seal the win.
“I found the spot where I caught my fish on Monday of practice, and I shook off several fish that I knew would weigh up to six pounds,” said Omori. “I knew the area was pretty special, but I was concerned the pattern had changed after a tough first day. You never know with these fish; sometimes they do exactly as they had in practice, and other times they just disappear for what seems like no reason. And, sometimes the fish just move around and you have to find them again. That’s what I did Friday through Sunday, and it paid off.”
Omori fished an area known as Decatur Flats, which is only three-to-four feet deep, but adjacent to the main river channel, which helps the area reload with fresh bass daily.
“Each day there were new waves of fish moving in, but I wasn’t sure that I could keep catching over 20 pounds,” Omori said. “That really helps when you’re trying to win a four-day tournament.”
Yamaha Marine products are marketed throughout the United States and around the world. Yamaha Marine Group, based in Kennesaw, Ga., supports its 2,000 U.S. dealers and boat builders with marketing, training and parts for Yamaha’s full line of products and strives to be the industry leader in reliability, technology and customer service. Yamaha Marine is the only outboard brand to have earned NMMA®’s C.S.I. Customer Satisfaction Index award every year since its inception. Visit www.yamahaoutboards.com.
May 6, 2016/by Shelley Giesecke
https://americanaoutdoors.com/wp-content/uploads/2017/02/TakWin1_0.jpg 496 513 Shelley Giesecke https://www.americanaoutdoors.com/wp-content/uploads/2017/11/AmericanaOutdoors_GarminWhite_Low.png Shelley Giesecke2016-05-06 17:09:122017-02-06 20:20:03Yamaha Pro Takahiro Omori Wins Bassmaster® Elite on Wheeler Lake
Newest Online Course from BoatUS Foundation and US Power Squadrons Details GPS/Chartplotter...

Smith & Wesson Sponsors ‘A Girl and A Gun’ National Training...
Scroll to top