ALEXANDRIA, Va.,– In 1966, boaters could buy a new mid-sized cruiser for about $7,000, outboard engines had just surpassed 100 horsepower, and recreational boating was growing on a large scale across America. It was also in ’66 that the nation’s largest recreational boating group, Boat Owners Association of The United States (BoatUS), got its start thanks to Founder Richard Schwartz who saw a need to make recreational boaters’ lives better. 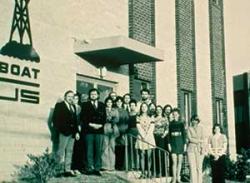 His vision of offering representation, improving safety, providing quality services at competitive prices and saving boaters money was all rolled up into the “service, savings and representation” motto that remains at the core of the more than half million member organization today.

“BoatUS has always been there for boaters and always will be,” said BoatUS President Margaret Podlich. “Whether it’s helping boaters have a safe day on the water, ensuring that boating taxes go to boating programs, offering competitive boat insurance coverage, or having the largest on water towing fleet in the nation, BoatUS is proudly the single source of exceptional service and savings. We’re steadfast in our commitment to protect boaters and their rights, making boating safer, more affordable and accessible.”

BoatUS will be celebrating its golden anniversary in 2016 with a series of special member events and coverage in its flagship publication, BoatUS Magazine, and other programs. A look back at five decades of BoatUS’ significant impacts and innovation include:

About Boat Owners Association of The United States (BoatUS):

BoatUS is the nation’s largest organization of recreational boaters with over a half million members. We are the boat owners’ voice on Capitol Hill and fight for their rights. We help ensure a roadside breakdown doesn’t end a boating or fishing trip before it begins, and on the water, we bring boaters safely back to the launch ramp or dock when their boat won’t, day or night. The BoatUS Insurance Program gives boat owners the specialized coverage and superior service they need, and we help keep boaters safe and our waters clean with assistance from the non-profit BoatUS Foundation for Boating Safety and Clean Water. Visit www.BoatUS.com.