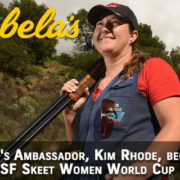 The six-time Olympic medalist from USA sealed the victory with a perfect score of 16 hits in the gold medal match, leaving behind her two Italian Olympic champions.USA’s Kimberly Rhode (37) won the women’s Skeet final at the 2016 ISSF Shotgun World Cup Final in Rome, beating Wei Meng of the People’s Republic of China in the gold medal match by 16 to 15 hits.

Rhode had cleared the semi-final with 14 hits out of 16 shots, passing through a three-way shoot-off with +7 to access the gold medal match.

The US champion had already met Wei a couple of months ago, in Rio de Janeiro: while competing in the Olympic final, they met in the bronze medal match finishing third and fourth, respectively.

Bacosi’s teammate, the 2008 Olympic Champion and 2016 Olympic silver medalist Chiara Cainero, took the 5th place with 13 hits in the semi-final, after losing a shoot-off against Bacosi to access the bronze medal match. She was followed by Cyprus’ Andri Eleftheriou, 6th with 12 hits.

“It was an incredible experience,” said Rhode, who had already won an ISSF World Cup Final in 2011. “We had some fantastic competitors out there, a lot of experience on the line. I am just very happy to be able to compete against them, and do as well as I did. I am very thankful for the day.”

Rhode confirmed once again to be one of the best Skeet shooters of the world, just two months after winning an Olympic bronze in Rio, where she collected her sixth Olympic medal in six consecutive Games.

“Going for that record, six for six, and having attained it in Rio, was an amazing, very humbling experience. And hopefully there’s more to come,” she commented today.

Starting with the Olympic title she won in Atlanta 1996 in Double Trap, and passing through a Bronze in Sydney and a Gold in Athens in the same event, Rhode eventually switched to Skeet when the Double Trap Women event was discontinued from the Olympic Program, in 2005.

In Beijing 2008 she competed in her “new” event, women’s Skeet, securing Silver, and then moved on winning the title at the London Games. In Rio, she achieved a record by pocketing her sixth medal in six consecutive Olympic editions, showing exceptional stamina and a great motivation.

“There’s a lot of sacrifice. Motivation comes from the people, and the competition. I really love being in that moment, out there, on the field, down to the last target. Sometimes you win, sometimes you don’t, but it’s really about the journey.”

“Right now, at the end of this season, I want to dedicate some time to my son and my family.”