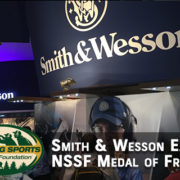 NEWTOWN, Conn. – The National Shooting Sports Foundation® (NSSF®), the trade association for the firearms industry, announced today that Smith & Wesson® has been awarded NSSF’s Medal of Freedom for the company’s outstanding leadership in contributing $500,000 to the association’s 2016 voter registration and education campaign. This is the largest contribution the #GUNVOTE campaign has received to date.

“Smith & Wesson really stepped forward with a generous half-million dollar contribution to our #GUNVOTE campaign,” said Lawrence Keane, NSSF Senior Vice President and General Counsel. “This commitment to help raise awareness that our citizens’ rights need to be protected for generations to come demonstrates true dedication to our industry and to our American heritage of hunting and the shooting sports.”

James Debney, CEO of Smith & Wesson, said, “We felt it imperative that citizens across our nation become informed about their rights, their candidates and the importance of their vote in this critical election year. Our industry is under assault like never before. The decision to support #GUNVOTE of behalf of our customers, employees, distributors and suppliers was clear to us a leading manufacturer.”

NSSF’s #GUNVOTE – www.gunvote.org – is a voter registration and education platform for use by firearms industry manufacturers, wholesaler distributors, retailers, ranges and media members that helps gun owners, hunters and target shooters to register to vote, to become informed on where the candidates in 2016 stand on gun control and conservation issues, and encourages them on election day, armed with the facts, to #GUNVOTE so they do not risk their rights. Industry members are strongly encouraged to download the #GUNVOTE button for their websites and social media use and order #GUNVOTE decals for distribution to family, friends and customers.

The National Shooting Sports Foundation is the trade association for the firearms industry. Its mission is to promote, protect and preserve hunting and the shooting sports. Formed in 1961, NSSF has a membership of more than 13,000 manufacturers, distributors, firearms retailers, shooting ranges, sportsmen’s organizations and publishers. For more information, visit www.nssf.org.