Angler of the year award up for grabs

NEW SMYRNA BEACH, Fla. – The Texas Team Trail (TXTT) presented by Cabela’s will host its championship event of the 2016 tournament season on May 14-15 at Ray Roberts Lake. The two-day championship will feature over 100% payout including two fully rigged Ranger boats guaranteed.

With more than 2,000 acres of standing timber and numerous feeder creeks, Ray Roberts Lake is known to consistently produce quality largemouth bass. A fully rigged Ranger Z519, valued at $45,000, is guaranteed for first place. Additionally, the second-place finishers will take home a Ranger Z518 valued at $34,000. The season-long chase for the TXTT Team of the Year is also at stake, with the winners receiving custom rings and paid 2017 entry fees, courtesy of Lucas Oil.

Registration for the event is underway – anglers can secure an opportunity to pre-fish Thursday and Friday, May 12-13, by completing their registration online or via phone prior to midnight Wednesday, May 11. Championship registration is limited to teams that have entered all four 2016 regular-season events and have participated in at least two of them. 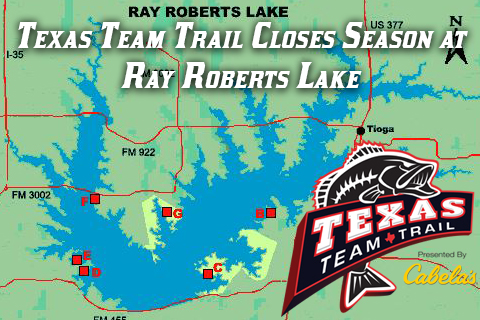 On-site registration is set for Friday, May 13, from 4-6 p.m. at the Ray Roberts Marina (1399 Marina Circle, Sanger, TX 76266). At least one team member must attend, as boat numbers will be assigned during this time. The tournament will launch each day at safe light from Ray Roberts Marina and the weigh-ins will begin at the same location at 3 p.m. each day.Anglers with questions or anyone interested in more details on the event are encouraged to visit www.texasteamtrail.com or call 210-281-1752 or 210-788-4143Texas Team Trail events are made possible through the sponsorship and continued support of these well-respected brands: Cabela’s, Ranger Boats, Lucas Oil, Evinrude, RAM, Mercury, Minn Kota, Triton Boats, Power-Pole, Amphibia, Arctic Ice, Stratos Boats, Lowrance, Navionics, Protect the Harvest, BoatU.S., General Tire, SuperClean, Garmin, Valley Fashions, T-H Marine, Atlas, G-Juice, Powertex Group.Remaining 2016 TXTT scheduled events: