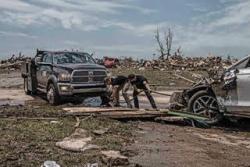 The day will start at San Marcos Chrysler Dodge Jeep Ram, where Ram truck owners will load needed supplies into their pickups’ beds. Then Ram owners will proceed to flood-stricken areas and help with home site recovery and deliver food, water and cleaning materials.

Last week, Ram Truck and the FCA Foundation announced the donation of $100,000 to the First Response Team of America.

Ram Nation is a grassroots organization of like-minded people willing and ready to help people in need, such as those in flood-damaged Texas. Ram Nation volunteers haul supplies, deliver equipment, clear debris, distribute food and water, and even make donations that help people in their communities and around the world. New members can join Ram Nation at: www.ramtrucks.com/ramnation.

Photo and video opportunities will be available.

About Ram Truck Brand
Since its launch as a stand-alone division in 2009, the Ram Truck Brand has steadily emerged as an industry leader with one goal: to build the best pickup trucks and commercial vehicles in the industry.

Creating a distinct identity for Ram Trucks has allowed the brand to concentrate on core customers and features they find valuable. Whether focusing on a family that uses a Ram 1500 day in and day out, a hard-working Ram 3500 Heavy Duty owner or a business that depends on its Ram ProMaster commercial van every day for deliveries, Ram has the truck market covered.